Skip to content
Search
Close
By Jaume Martorell Cruz
Based on CGR Working Paper:
Conflicting incentives for the public to support the EMU

On May 2014, European citizens across 28 countries elected their representatives in the European Parliament. This time with one important novelty: the designation of trans-national candidates, hailed as an important step in the building of a European “demos” beyond national constituencies, highly commented during the campaign it was eclipsed by the rise of European critics in the electoral aftermath. In some cases a worrying ascent, built upon a discourse of xenophobia and nationalism, represented by parties such as Marine Le Pen’s Front National in France.  In other cases the conditions attached on financial aid galvanized Mediterranean hard left. In Greece, the Syriza candidature led by Alexis Tsipras defeated the ruling coalition of PASOK and the New Democrats. In Spain, the newcomers “Podemos” obtained 5 MEPs built upon the denunciation of the mainstream political system, dubbed by them as a “caste”. The chain reaction started by “Podemos” illustrates the link between the rise of so-called leftist populism and the European institutions: The electoral results provoked a crisis on the mainstream social-democratic party (PSOE), after which the new leader reneged on their promise to vote for Jean Claude Junker as president of the European Commission. The rise of EU critics muddled the promise of the hyped “European Candidates”.
This upheaval should not come as a surprise. The Euro debt crisis has forced countries into a package of painful internal devaluation and fiscal consolidation, deadly for national governments electoral chances. What is more surprising is the apparent resilience of citizen support to the Euro and the EU across the Economic and Monetary Union, as we can see in figures 1 to 3.
Figure 1 – Perceptions on the Future of the EU 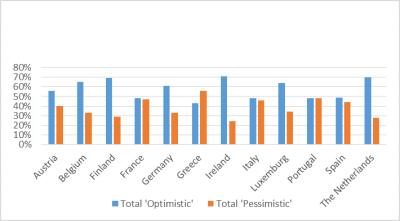 Source:  Eurobarometer
Figure 2 – For or Against the Euro

Source: Eurobarometer
Figure 3 – For or Against the Euro (historical trend)

Source: Eurobarometer
Figure 1, charts the citizens prospects regarding the Future of the European Union. As we can see there are more EU-optimist than EU-pessimists across all Euro-zone countries, with the exception of Greece. However, as we see in Figure 2, even in Greece there are more citizens in favor of the Euro than against. Is a trend that has been constant across the last decade, as Figure 3 shows the public opinion across the Eurozone are considerably more supportive of the Euro than the public opinion across all the European Union. Thus, where are the symptoms of discontent?
Figure 4  –Evolution of Positive Views of the European Union across Eurozone initial members

Source: Eurobarometer
We start to see those signs on Figure 4, which charts the average level of positive views enjoyed by the EU across countries that have received financial help and adhered to Troika’s programs (Portugal, Italy, Greece, Spain, and Ireland) and the rest of the EMU initial members. After 2008 the positive views decline, across intervened countries the decline is more steeped and shows less signs of recuperation, while before 2008 those where in which the EU enjoyed higher positive views. This decline is even more accentuated on Figure 5 – that illustrates the average level of positive views on the national economic situation programme countries and the rest of the EMU – showing an increased divergence between intervened and non-intervened countries.
There is a puzzle in this initial exploration of the data: Across intervened economies rise political alternatives highly critical with the European leadership, the citizen’s perceptions of economic situation has plummeted, and the reputation of the EU has considerable diminished; however, the optimism regarding the future of the EU and the support for the Euro remains strong.
In one of the CGR´s latest working papers, Professor Brigitte and Granville and Dominik Nagly offer a plausible explanation for this phenomenon: While citizens may grow discontent with the European development they are more wary of the possible cost of a Euro break-up.
Following Brender and Drazen, they model citizen’s preferences towards the EMU upon three factors: Economic Performance, government intervention and external shocks. Citizens would prefer regimes where the combination of these factors maximizes their income. If we apply these factors to the Euro regime the results are not encouraging, especially in the countries blighted by the currency crisis.
There is a lackluster economic performance, partly caused by the deficient institutional design of the Euro, as the authors’ reason. The Euro produced an asymmetric effect over the competitiveness on their original members. The credit flowing from north to south ignited a credit bubble that increased private borrowing while competitiveness declined.

Source: Granville and Nagly (2014)
Granville and Nagly compare the labor costs across Germany and France, Italy, Portugal, and Spain, showing how these increased while Germany decreased. Short of abridge divergences, as the Euro seemed to promise, it increased them.  Thus the underlying economic situation under the Euro does not seem to be positive for these countries. Furthermore, the external shock, in the form of a currency crisis has even worsened the economic situation.
In Brender and Drazen original model, government intervention is commonly used to strengthen voter support with favorable policies. However, in the case of the Euro the only possible government intervention left is the fiscal tightening required to comply with the fiscal compact, leaving “internal devaluation” as the only way left to recuperate competitiveness. Again, Granville and Nagly trace this to Euro’s original sins. Having been built with a no-bail out rule to prevent free riding and hoping that economic convergence would suppress current account imbalances, despite dire warnings regarding the dangers of lacking a lender of last result and the difficulties of economic convergence, led to disastrous consequences. The single currency means that less competitive Euro-zone countries only can face internal current account imbalances with transfers, the no-bail out rule means that these transfers must be conditional on fiscal retrenchment. The only other tool at hand is embrace internal devaluation and bear down labor costs. Arriving at a situation where less competitive countries bet their recuperation on fiscal transfers aimed to prevent bankruptcy without regarding for cushioning the effects of an external adjustment only made through internal devaluation.  Consequently it is not surprising the decreased citizens’ support to the Euro. In this context, what is surprising is the perseverance of robust levels of support
In short, in Granville and Nagly’s model, euro citizens would prefer the regime that maximizes their income, in this case the Euro vs. national currencies. As we saw on Figure 5, the perception of economic performance has plummeted after 2008, especially across intervened economies. It does not seem that citizens may be able to maximize their income under the EMU, especially in programme countries adhered to the fiscal compact and where growth is stalled by an inappropriate balance between micro-structural reforms and fiscal austerity .  Given these poor prospects the reason behind Euro resilient support may lay in the perception of the alternative. According to the authors, how to present this alternative is the only resource available to European elites to retain public support to the Euro, through a so called “fear discourse” that ensures the support for the status quo by making the costs of a break-up appear prohibitive.
That is why, on the heels of the European Solidarity Manifesto, they call for a correction in the public debate regarding the future of the Euro. In order to do it so, they provide an initial assessment of the required currency adjustment in case of a Euro break-up.

Source: Granville and Nagly (2014)
In first place, they estimate the current currency over or undervaluation across Germany, France, Spain, Italy, and Portugal. Then, project the impact that this over/undervaluation would have in a case of a Euro-break up: Assessing the cumulative impact on Inflation for 4 quarters, 8 quarters, and the Export Impact for 4 quarters. As we can see on Table 4 we should expect to see disinflation in Germany and a relative strong inflation across Italy and Spain, which could be used to monetize debt after the dissolution of the EMU. Regarding exports, Germany would be the main the main prejudiced by losing its current undervaluation.  Justifying the authors’ assertion that exploring the costs of a breakdown would neutralize the “fear discourse” and help European citizenship assess properly the dismantling of the Euro as the way forward for the European Project.
Jean Claude Juncker, coined the phrase that came to define the Euro-crisis’ management: “We all know what to do, we just don’t know how to get re-elected after we’ve done it.” How ironic then, that he became the first European Commission president able to claim some sort of electoral mandate amidst the rise of the Euro-critics. Granville and Nagly put forward a hypothesis that explains this apparent contradiction: the “fear discourse” regarding a Euro break-up is the crotch that European leaders use for ensure citizens support. Granville and Nagly, present an alternative: provide clear costs for a possible break-up that, according to them, could be the most solid exit out of the currency crisis while maintaining the European project.

The Centre for Globalisation Research (CGR) from the School of Business and Management Queen Mary University of London conducts research, dissemination and user engagement activities around three research themes:

The Centre hosts the Research Circle for the Study of Inequality and Poverty (RCSIP) as a research cluster.