Skip to content
Search
Close
On 22 April, Professor Brigitte Granville – Centre for Globalisation Research Director– was invited by the European Conservatives and Reformists (ECR) Policy Group to take part in the workshop “Exchange of views on the Eurozone Crisis”. The conference was chaired by Professor Joachim Starbatty MEP and other speakers included Professor Alberto Bagnai – Associate Professor of Economic Policy at the Gabriele D’Annunzio University, Pescara (Italy) – and Frits Bolkestein – former European Commissioner for Internal Market and Services. 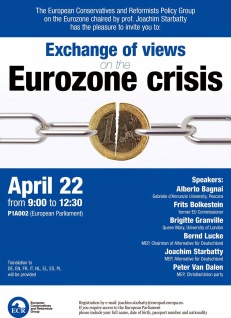 Professor Granville’s talk, entitled “Can France reform itself within the Euro?”, showed how the French elite has taken advantage of the single currency to avoid having to undertake the reforms necessary to modernise the country’s economy. She began by recalling the competitiveness gap between France and Germany (the two EMU founders) stemming from differences in inflation rates and relative unit labour costs. The main reason for this divergence in unit labour costs is France’s heavy burden of payroll taxes, which (together with borrowing), is a crucial source of financing for the country’s very high public expenditure that has now reached 57 per cent of GDP (the second highest level of any EU member state). The preservation of this ‘French model’ has been helped by the introduction of the Euro, as this has allowed France to borrow at virtually the same low interest rate as Germany, in turn removing the urgency to implement structural reforms sheltering the state elite from social unrest.
But if the euro has allowed the ‘exception française’ to survive, the prospects for strong growth and full employment are bleak thanks to outdated institutions and, in particular, the nature of the state elite that seems poorly prepared to adapt the country to shifts in the global economic order since the last quarter of the twentieth century, when innovation and creativity have become core growth drivers in an environment of more open international trade and capital flows.
The hermetic elite that controls the French state, media and leading industries is the product of a rigid and outdated system of selection and training centred on the Ecole Nationale d’Administration (ENA) , which supplies the personnel for the most powerful bodies in the state bureaucracy (the so-called “grands corps”). This has significant consequences for the country’s economy. In this connexion, Brigitte Granville compared the structure of “Economic Freedoms” in France and Germany, highlighting how a highly professional, impartial, and closed French public administration tends to meddle in business activities (as reflected on Bar Charts I and II). Not only has the French elite proved incapable of rising to the challenge of tackling France’s economic troubles; the elite itself is a main cause of these troubles.

Professor Granville concluded that the effect of the single currency in relieving pressure to carry out the reforms required to boost France’s competitiveness has allowed France to become the Eurozone’s free rider – that is, a country that is “too big to fail” and that Germany is “too afraid to constrain”.
Below you can find a video of Professor Granville’s talk. As mentioned above, the conference was organized by the ECR Policy Group, a think tank linked to the ECR Group in the European Parliament designed to encourage the exchange of ideas among policymakers and academics rather than be a political platform.
Professor Granville’s talk drew on a forthcoming paper “Institutions, Thickets and Elites:
French Resistance and German Adaptation to Economic Change, 1945-2014” written in collaboration with two CGR’s fellows, Jaume Martorell Cruz and Dr Martha Prevezer.
Further information on the relationship between France and the Euro can be found on the following CGR working papers: