Skip to content
Search
Close
The road to the Olympics in Rio has been paved with controversies that now seem difficult to remember. True, the fraught construction process has left a legacy of green swimming pools and unfinished accommodation while the thefts around the Olympic village are a stark reminder of Rio’s rampant inequality, but the opening ceremonywas a jolt of enthusiasm, after which previous controversies were subsumed by amazing athletic prowess. It is not that different to what happened in London four years ago, once the opening ceremony closed the complaints and cynicism turned into Olympic fervour. It seems that, once the show is on, the Games can only improve the mood.
That is the question that the new CGR Working paper “The Host with the Most? The Effects of the Olympic Games on Happiness” tries to answer. Written by Paul Dolan, Georgios Kavetsos, Christian Krekel, Dimitris Mavridis, Robert Metcalfe, Claudia Senik, Stefan Szymanski and Nicolas R. Ziebarth, provides empirical evidence that hosting the Olympic Games in 2012 had a positive impact on the life satisfaction and happiness of Londoners, albeit a short one.
Traditionally Olympic Games have been presented by hosts governments as an investment that produces substantial economic returns however, the authors point, the evidence against this is overwhelming. There is now a long strand of research that concludes that games are money-losing investments.  Thus, with the idea that the Olympic Games provide a tangible economic return effectively debunked, advocates of the Games have stressed the intangibles in terms of inspiration and citizen engagement. The new CGR research paper tests this proposition.
To test the intangible impact of the games, the authors use measures of subjective wellbeing through four questions classified in three dimensions: evaluative measuring life satisfaction (Overall, how satisfied are you with your life nowadays?), experiences (Overall, how happy did you feel yesterday? / Overall, how anxious did you feel yesterday?), and Eudemonic measuring the sense of worthwhileness (Overall, how worthwhile are the things that you do in your life?)
The authors treat the Games as a natural experiment and use a Difference-in-Differences approach to capture the causal effect of the Olympic Games in subjective well-being. The Difference-in-Differences estimator is an intuitive tool that, if properly used, allows to disentangle the causal effect of a treatment from other confounding factors. One of the main problems in social science research is that large scale experimental designs are rarely viable, as such ideally random control groups are hard to find. The Difference-in-Differences estimator allows the researcher to overcome this difficulty by identifying a control group affected by common time trends and accounting for the unobserved factors by comparing the difference in means between the treated and control before the treatment and after the treatment, hence the Difference-in-Differences moniker.
The paper surveys a panel of 26,000 individuals in London -that experienced the Olympic Games, Paris, and Berlin -the control group that did not experience the Olympic Games- over the summer of 2011 (before), 2012 (during) and 2013 (after). Their initial Difference-in-Difference approach allows them to corroborate that Londoners experienced and increase in subjective well-being during the games, although the legacy effect was not visible one year later. These tests are later corroborated with models that control for demographic, human capital, and economic conditions, as well as further robustness tests. A graphic representation of the effect of the Olympics on Subjective Well-Being can be observed the figure below. 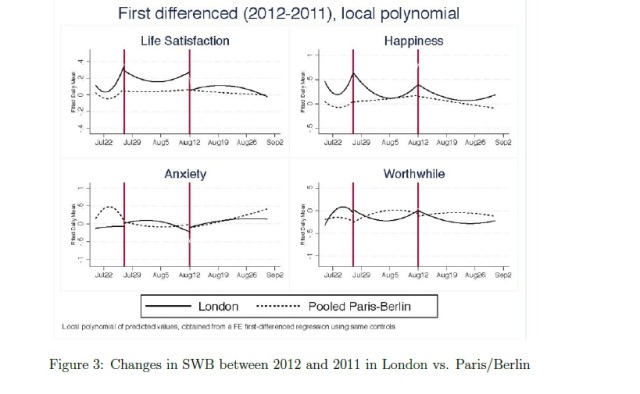 The figure plots the main differences in SWB for each individual observed in 2011 and 2012 averaged by calendar dates. In first place we can observe the parallel trend between those that experienced the Olympics (London) and those that not (Pooled Paris-Berlin) before and after the period, and can also be observed that this trend diverges during the period. During the Olympic periods we can observe that Londoners reported higher levels of live satisfaction, happiness, worthwhileness, and lower levels of anxiety. The authors note that this increase was also steeper during the opening and closing ceremonies.
This paper might explain the allure that hosting the Olympics brings not only to local politicians and sport fans but to the wider population, as effectively shows that the Games had an important intangible impact. If this jolt of well-being is worth the price tag has yet to be determined, as the authors conclude:

“Overall, many cities spend substantial resources attracting and then hosting the Olympic Games, but the evidence to date suggests that the Olympics do not have a significant economic benefit to the host city. This paper presents the first causal evidence of a positive wellbeing effect of the Olympic Games on local residents during the hosting of the Games. The effects do not last very long, however, and the Games show no effect on Subjective Well-Being a year later. The host with the most. But not for long. “

You can read the complete paper in the CGR Working paper series:
The Host with the Most? The Effects of the Olympic Games on Happiness
by Paul Dolan & Georgios Kavetsos & Christian Krekel & Dimitris Mavridis & Robert Metcalfe & Claudia Senik & Stefan Szymanski & Nicolas R Ziebarth

1 June 2022| ‘Demand or Supply? An empirical exploration of the effects of climate change on the macroeconomy‘ Fulvia Marotta (QMUL) and Matteo Ciccarelli (ECB)