Dr Sanghamitra Bandyopadhyay -Senior Lecturer in Economics at Queen Mary, University of London, and CGR Deputy Director- has published a new CGR working paper on “The Persistence of Inequality across Indian States”. Dr Bandyopadhyay organises the annual “Workshop on the Theory and Empirics of Inequality, Poverty, and Mobility” and, as she remarked in this year workshop, these are interesting times for researchers on inequality and development, with vibrant debates on inequality and poverty across academia and beyond. Not only have the recent works of Thomas Piketty and Tony Atkinson revived the public debate on inequality, but Angus Deaton received the Nobel Memorial Prize on Economic Sciences for his analysis on consumption, poverty, and Welfare.

In her latest CGR working paper, Dr Bandyopadhyay delivers a substantial contribution to the debate on inequality and development, exploring the persistence of income inequality across Indian States between 1960-2011. As she explains in the introduction, while there is rich and abundant literature on the dynamics and causes of inequality across nations, there is still much to explore on how these dynamics play at a sub-national level. In particular, the dynamics of persisting regional inequalities across developing economies tend to be associated with political instability and violence. Dr Bandyopadhyay singles out India as an excellent case study to explore this phenomenon, with individual states GDP ranging from the equivalent of Portugal, for the richest, and Ghana, for the poorest.

Dr Bandyopadhyay had already explored regional inequalities across India in her 2011 paper “Rich States, Poor States: Convergence and Polarisation in India” published in the Scottish Journal of Political Economy. There she examined the income distribution of Indian states, and pointed towards the development of two “convergence clubs” between 1965 and 1997: one around 50% and another one around 125% of the national average income. In her new CGR working paper she uses a longer data-set, starting at 1960 and 2011 that still points towards the persistence of the two income clubs.

In Figure 1, we can observe evidence of the persistence of these two “clubs”. 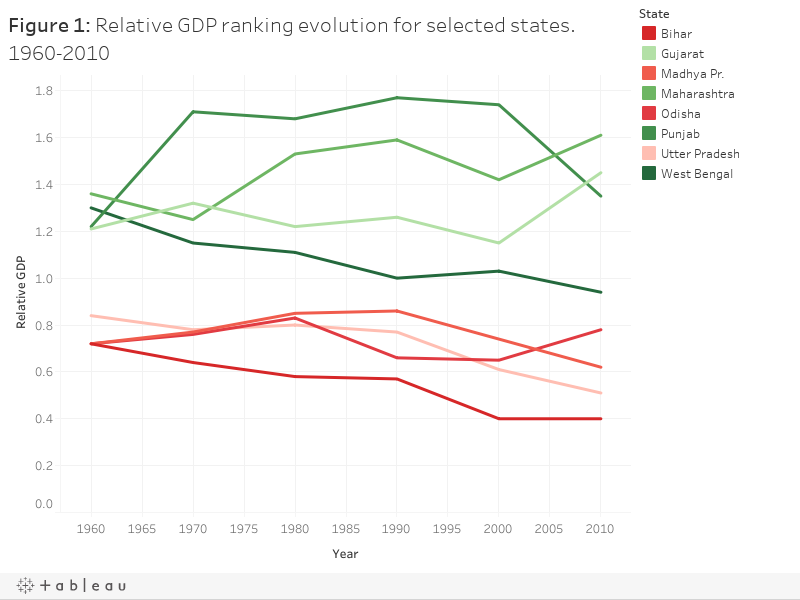 Figure 1 charts the evolution, from 1960 up to 2010, of the relative GDP (a value of 1 is equivalent to the average GDP of all Indian States) for the four highest and four lowest ranked states in 1960.  We can observe how regional convergence clubs persists across time: Gujarat, Maharashtra, and Punjab start around 1.2 and 1.4 and end between 1.3 and 1.6 by 2010; In contrast lower ranked states tend to cluster around 0.7 at the beginning and between 0.6 and 0.4 by the end of the period. An exception, included in Figure 1, is the particular case of West Bengal that has gradually dropped from the richest group to the middle of the distribution. According to Dr Bandyopadhyay, the overall evolution of relative GDP reveals “a picture of persistence at the top and the bottom, with some middle income states mobility (…). In addition to the rich remaining rich and the poor remaining poor, it is also clear that the rich and the poor are moving apart, with little intradistributional mobility”.

This dynamic can be observed in greater detail in Figure 2 -Figure 1c in the Working Paper- that colour codes the relative GDP of all Indian states for the period.

To provide a more detailed exploration of intradistributional mobility dynamics, Dr Bandyopadhyay tests the existence of convergence processes and how much time takes for the Indian States to revert back to the mean after an income shock. Her results conclude that, while there is no process of overall convergence, a considerable group of states -Andhra Pradesh, Assam, Gujarat, Karnataka, Madhya Pradesh and Rajasthan- revert to the mean relatively quickly- between 0 and 10 years- after an income shock. This new finding presents a more optimistic outlook than previous research on India’s regional disparities but falls short to point towards regional income convergence, as Dr Bandyopadhyay concludes:

“The finding that the long rung trends of relative income are divergent, but are mean reverting for some is a moderately optimistic finding compared to earlier studies (such as Bandyopadhyay 2004, 2011) which suggest divergence and polarisation. However, the finding of high persistence for most others suggests that the polarising tendencies uncovered in the literature are due to continue, that the rich and poor states will continue to move apart.
That these trends persist in spite of the efforts of both the Federal and state level governments efforts to equalise economic growth in the respective states, is suggestive that traditional tools for economic growth and development as pursued by developing countries, and by the Indian state, may not be able to contain the strong diverging tendencies observed. The Indian case will likely require a new set of aggressive development strategies specifically designed to bring in the gap between the richest and the poorest states. The continuing diverging trends present a serious problem for the steep social and class divide that characterises India and may even fuel separatist and secessionist forces that already exist.”

You can read the full article in the CGR Working Papers collection: