One of the most significant ways in which labour markets are changing is the rise of the so-called “Gig Economy”, a pattern in which firms increasingly employ contractors. New disruptive companies are built on this model that allows these new start-ups to grow and adapt quickly while their contractors enjoy flexibility to work when and how they want. However, as the recent strikes of UberEats and Deliveroo couriers across London remind us, this new model of employment relations comes with its own sets of challenges and possible pitfalls.  A new CGR Working Paper, “The third worker: assessing the trade-off between employees and contractors”, by Pedro Martins, –Professor of Applied Economics at the School of Business and Management, Queen Mary, University of London,-provides new insights on the decision-making process of firms when choosing between contractors or employees.

In the CGR Working Paper N. 75,  Prof Martins examines why firms would decide to employ contractors instead of employees and how changes on labour regulations influences this decision.   Specifically, he analyses the effects of an employment reform in Portugal that, after coming into force on November 2011, cut the severance pay of new employees while leaving contractors’ regulation unaffected. Prof Martins exploits this design to develop a difference-in-differences strategy in which contractors act as control group of the employees affected by the reform.

The paper analyses the impact of the reform across two dependent variables: the firm’s monthly wage bill and number of workers, and uses several dummy variables through a difference-in-difference set-up to capture the effect of the reform. The first set of dummies indicates if the workers were employees (affected by the reform) or contractors (not affected), the second set indicates the period from January to October 2011 (when the reform was not in force) or the period from November 2011 to June 2012 (after the reform was passed). His main independent variable of interest is the interaction between the treatment group and treatment period dummy variables, which captures the effects of the reform on the log of employee’s wage bills and labour count.

Figure 1 includes the coefficients of these estimations for all of Prof Martin’s sample, and for specific sub-groups of firms with low wages or high turnout employee turnout. 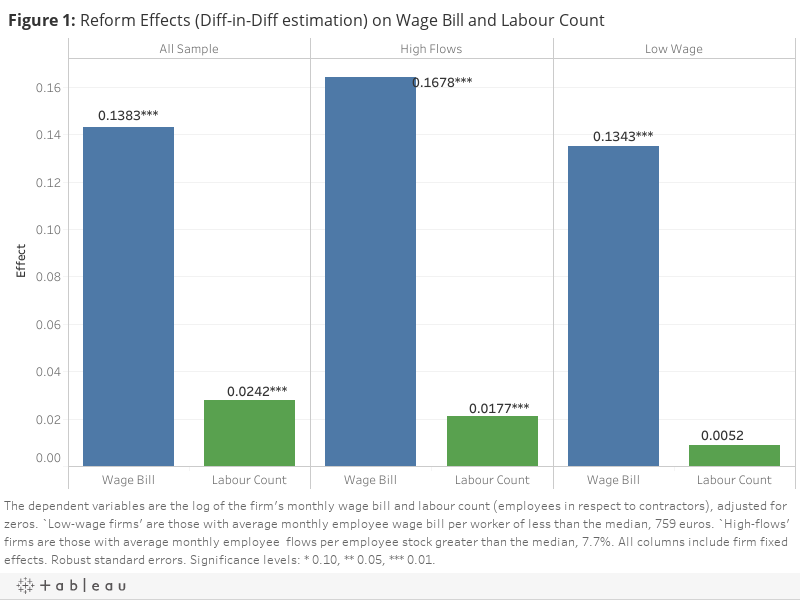 As it can be observed on Figure 1 the reform had a significant positive effect in Employee’s wage bills across all the sample and sub-groups, also a smaller one on the labour count. Figure 2 expands on this, compiling the Wage Bill impact of the reform across different sectors. 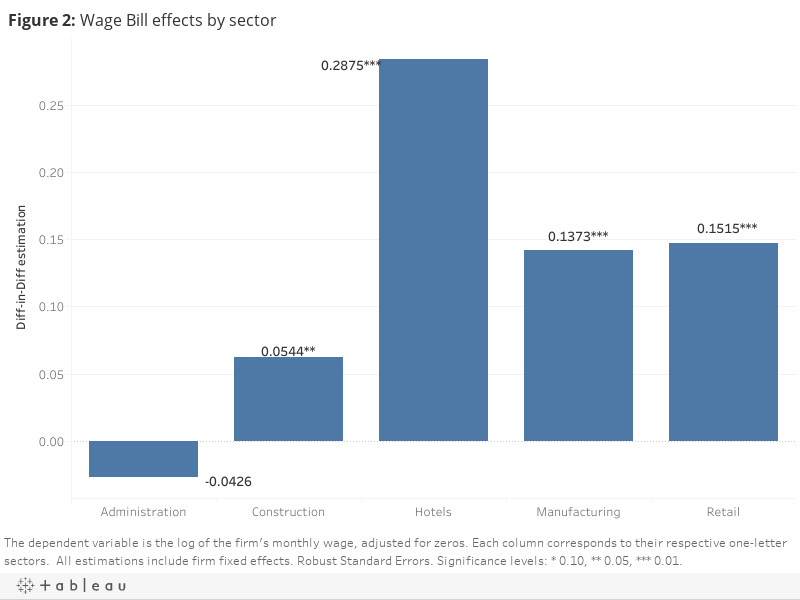 In Figure 2 we can observe how the reform had specially a positive effect on Hotels, Manufacturing and Retail. The only negative effect is in administration but is also the only non-significant. All in all, across most sector and types of firms the reform increased employees’ wage bill in comparison to contractors.

Difference-in-differences essentially is a comparison of means that captures the how the differences between the means of treated and non-treated groups evolved before the treatment and after the treatment. By having different periods -in this case monthly data from November 2011 to June 2012- the same set-up can be used to obtain a periodical comparison of means. In his research, Prof Martins provides monthly difference-in-differences estimates of the employees’ wage bills difference in means in respect to contractors. Figure 3 compiles these estimates providing a clear illustration of the effects of the severance pay reform in monthly employees’ wage bill. 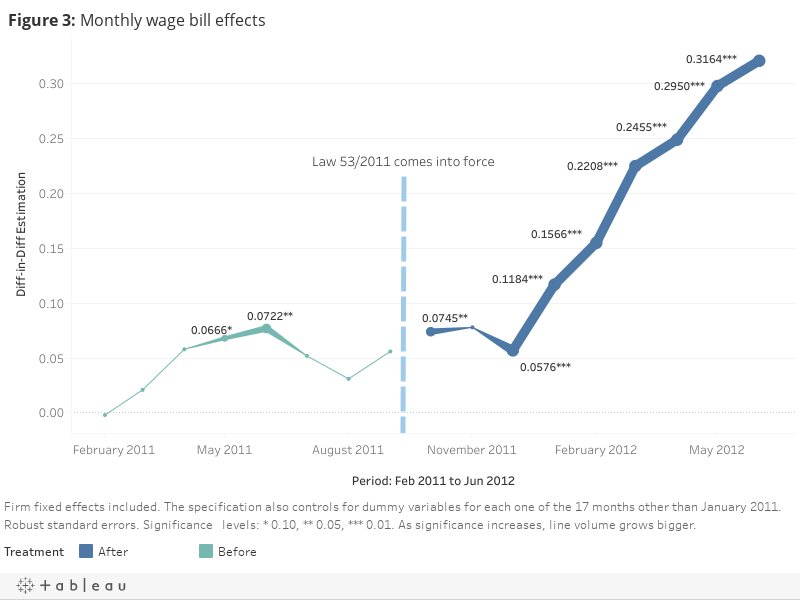 Figure 3 shows clearly how the reform coming into force had a positive effect on employee’s wage bill, increasing the magnitude of their mean differences in respect to contractors’ wage bill. Furthermore, while before the introduction of the bill there is only two monthly estimates significant at the 0.10 and 0.05 levels after the introduction of the bill nearly all of the monthly estimates are significant at the 0.01 level.

These results are corroborated by robustness tests to account for seasonal effect, confirming that reducing the severance pay of employees had a positive impact in their wage bill and labour count in respect to contractors. As Prof Martins concludes, his research:

“… presents causal evidence of the effects of employment protection law, in particular severance pay, on the employee/contractor trade-off. From a policy perspective, these findings indicate that reductions (not increases) in labour regulations may help to promote more standards forms of employment, which offer far greater protection to workers. This may be particularly the case in context in which the economy is under recession and regulations are restrictive”.

You can access the CGR Working Paper through the following link:

The paper contributes to Prof Martins ongoing research on the possibilities of adjusting labour market flexibility across business cycles.In his latest CGR working papers Prof Martins has been examining how adjusting labour institutions across the business cycle certain -a sort of Taylor Rule of labour regulations- could contribute to offset the effects of recessions on employment. These working papers are available from the following links: