In 2009 the German government spent around 5 billion € to incentivize the replacement of older cars and to keep the car industry afloat after the financial crisis of 2008. The graph on the left below shows the smoothed market shares of the main manufacturers selling cars in Germany before and after that year.

VW, Opel (GM), Ford and Renault did very well out of the subsidy while BMW and Mercedes clearly took a hit. 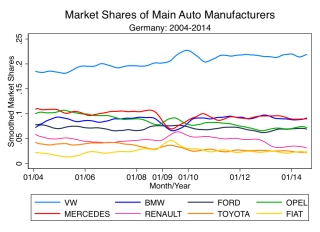 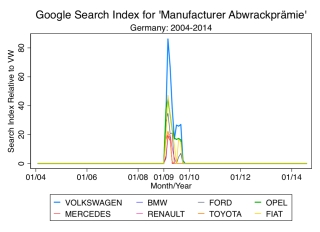 This temporary shift in the demand for cars of specific manufacturers was preceded by a sudden and very strongly correlated increase in searches on Google for the names of the manufacturers and the name of the subsidy: “Abwrackpraemie”. The search intensity even reveals how interest initially diminished after the first 1.5 billion € was used up and then grew again once the government announced an increase in the total level of the available funds. By September the funds were used up and searches stopped.

We ( Graevenitz/Helmers/Millot/Turnbull ) exploit this subsidy “shock” to analyse how data on searches from Google Trends can be used to predict sales of cars in the United Kingdom and in Germany. We use monthly data for Germany, but were lucky to be able to obtain weekly data for the UK. This allowed us to also use weekly data that can be obtained from Google Trends on searches for car models.

The paper shows that predicting sales is possible with Google Trends data, but it requires some care. The data we have available is rather sparse (searches for models, searches for manufacturers, searches for the subsidy, lagged sales) and the dynamics of search and sales are tricky. More importantly Google Trends data contains information on searches motivated not just by the intention to buy but also by searches after a purchase and by fans of a product. We had to work out how to identify only those searches arising from the intent to buy. The empirical results demonstrate that if no corrections for other types of search are made, the resulting estimates of the effect of search on sales can be significantly biased.

Increased searches are found to predict a greater increase in sales for Germany than for the UK. Search increases of around 3 percentage points (about one standard deviation) preceded increases in sales four times larger in the German data. On the other hand searches for the scrappage subsidy, which was lower in the UK, had an effect on sales that was twice as strong as in Germany.

Overall the paper demonstrates how data on internet search can be used to predict product sales levels. As internet search also reveals variations in interest in many other things the methods used in the paper should have a wide range of application.

The Centre for Globalisation Research (CGR) from the School of Business and Management Queen Mary University of London conducts research, dissemination and user engagement activities around three research themes:

The Centre hosts the Research Circle for the Study of Inequality and Poverty (RCSIP) as a research cluster.